Native Lead rarely occurs in nature. It is usually associated with ore with Zn, Ag and Cu, and is extracted together with these metals. The Lead metal is primarily extracted from sulphide ore i.e galena (PbS), which has the 86.6% Lead content. Two other minerals commercially mined for Lead are cerussite (PbCO3) and anglesite (PbSO4). Over 95% of all Lead mined is derived from one of these three minerals. The largest source of Lead, however, is from recycling, & the automobile battery takes the lion’s share. 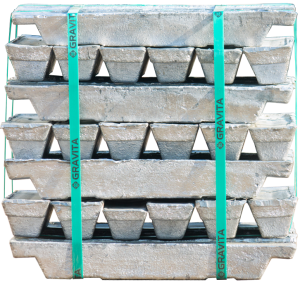 Lead is a relatively soft metal with bluish-white lusture but on exposure to air, it becomes covered by a dull, gray layer of basic carbonate that adheres closely and protects it from further oxidation or corrosion. It has a low tensile strength and a relatively poor conductor of electricity. It has a face-centered cubic crystalline structure. Modern Lead mines produce about 3 million metric tons of Lead annually. This is only about half the Lead used worldwide; the remainder is obtained by recycling. The top producer of Lead is Australia, followed by the United States, China, and Canada. Other countries with major Lead deposits are Mexico, Peru, Russia, and Kazakhstan.

Lead has the advantages of low melting temperature (327°C) and good malleability, which enable Lead articles to be cast, join & shape easily. The very high density of Lead makes it suitable for shielding against sound, vibrations and radiation, for example as protection for users of computer and TV screens. For these purposes Lead is used in metallic form or as Lead compounds in Lead glasses. Some compounds of Lead have their own useful properties, particularly in relation to color and glass-forming ability.